Are you Considering Charity Litigation Proceedings?

Whether a charity dispute relates to breach of contract, employment law, landlord and tenant matters, or trustee issues, the organisation and its trustees must consider the impact litigation will have and whether it is in the charity's best interests to pursue or defend a litigation matter.

In all cases, charities should take legal advice, preferably from a specialist charity litigation solicitor, before going ahead with legal action, whether as a claimant or defendant.

If legal proceedings can be defined as ‘charity proceedings’ under section 115 of the Charities Act 2011 (the Act), then permission to pursue or defend the litigation matter must be sought from the Charity Commission (the Commission).

The Charity Commission’s guidance on charity litigation says that trustees have a duty to act in the best interests of their charity and that, as litigation presents a significant risk to a charity, trustees are expected to have applied the principles of the guidance when deciding whether or not to apply to the Commission.

As defined by section 115 of the Act, ‘charity proceedings’ are specific types of legal action which generally relate to internal affairs or administration, including:

Who Can Apply to the Commission?

Before anyone can embark on charity litigation, they must first establish an interest in the charity and their right to bring legal proceedings. Parties who can bring charity proceedings are:

Other Types of Charity Litigation

Charity litigation which does not fall under the category of ‘charity proceedings’ generally involves a third party and includes:

The same fundamental responsibilities regarding risk and liability still apply in charity litigation and trustees must still act in the best interests of the charity.

All charities, whether incorporated or unincorporated, have the power to take legal action or defend a claim made against them as long as trustees are able to demonstrate that any litigation (including that which requires the Commission’s consent) has been brought in the charity’s best interests.

In most circumstances, Trustees should be able to recover the costs of the proceedings from the charity where they are not recoverable from another party. However, trustees may be held personally liable for costs in the following circumstances:-

Where the decision to continue with legal action was unreasonable; and
Where a trustee is in breach of his/her duties to the charity; and
Where there has been ‘misbehaviour’ during the proceedings; and
In the case of unincorporated charities, where the charity’s funds do not meet the costs arising from the litigation

In order to minimise the risk of personal liability, Trustees may wish to seek to obtain insurance to cover the eventuality. In addition, they can consider making an application to the Court for a Re: Beddoes order which would seek the Court’s prior approval of the proposed course of action in advance in addition to the Charity Commission permission granted which is not sufficient protection in all cases.

To Litigate, Mediate or Negotiate

The risk to a charity of litigation, regardless of outcomes, can be more multifaceted than purely the financial cost. The costs in resources and reputational damage may far outweigh even a successful claim, so it is essential for trustees to explore all reasonable avenues of resolution before resorting to the courts.

An Expert Team for your Charity Litigation Needs

Charity litigation matters are a specialist area in which Wellers has significant experience, and our dedicated Charities Team works alongside our litigation and dispute resolution experts to provide solutions for charities and their trustees across the UK.

There are a number of very sensitive issues surrounding safeguarding, charity governance and GDPR, charity property and charitable company formation which require niche legal knowledge should a dispute arise. We can help.

Our charity solicitors work across London, Kent and Surrey and we will be happy to discuss your charity litigation issue with you so you can decide what steps you wish to take in a dispute. Please call on 020 7481 2422. 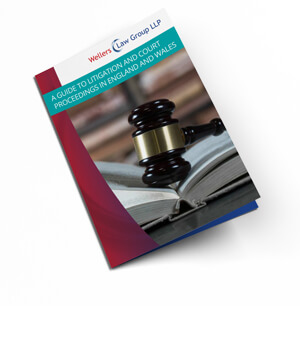 If your charity provides grants to…

Prince Charles – a reminder to take precautions when accepting donations

It was recently reported that…

With the Charities Act 2022 (“2022…
We use cookies to ensure that we give you the best experience on our website. If you continue to use this site we will assume that you are happy with it.Ok